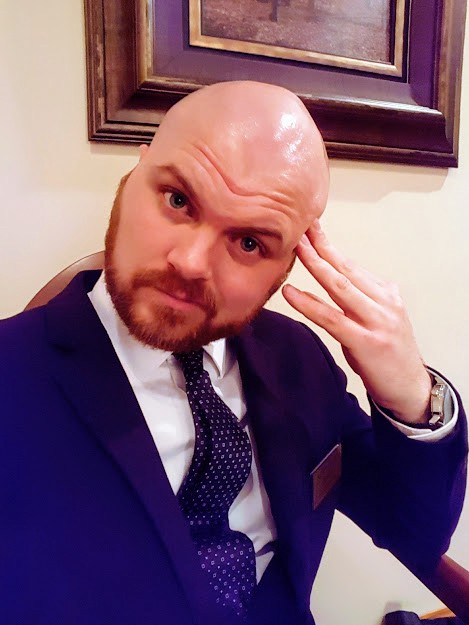 “I’m going to school to become a mortician.” “Wait, really… why?”

I’d imagine when letting the world know your intentions, it doesn’t always hit you back with positivity. Sometimes, it might not even hit you back with anything at all. It’s even worse when you’re suddenly questioned, and then, you start to question yourself. Well don’t. Especially when it comes to becoming a funeral director.

The world needs more funeral directors, morticians, undertakers… whatever you’re calling us theses days. Heck, I’ve even been called an event planner and a death dealer before when it comes to my career. It comes with the territory I suppose. Just as all the names come and go, so do the dad jokes. And you have to be willing to take them. I mean, people are just dying to see us, aren’t they? Ha.

I’ve been a licensed funeral director in the state of Wisconsin for three years now. In fact, today is my three year anniversary of when I passed my final board exam to become licensed. You see, passing state and national board exams to obtain a funeral director’s license is only one of the many steps necessary. At least in Wisconsin it is. Each state is different, however.

There is a disclaimer before I continue: The requirements listed in becoming a licensed funeral director are based on Wisconsin only. If you are in another state, please check your state statutes and regulations. I can only speak on what I know and have done thus far. Alright, let’s get down to it, shall we? I know you’re all dying to. OK, OK… I can’t use the same dad joke twice. I’m not even a dad anyway.

Let’s start with the very beginning: deciding you want to become a funeral director. Cool, where do you begin!?

In the state of Wisconsin, at least, one must go through a myriad of steps. I have listed ten. Carry on, wayward inquiring minds…

Number One: Have a high school diploma with at least one year of high school chemistry and biology. That’s the easiest step. Be prepared to study your ass off and have a lot of sleepless nights doing so, as the next nine steps will test your will to want this. And you have to want it.

Number Two: Acquire 57 college level credits in categories deemed acceptable by MATC (Milwaukee Area Technical College). I mention MATC because, little known fact, it is the ONLY school in Wisconsin that one is able to attend mortuary school. And not every state even has mortuary schooling.

Number Three: Once those 57 credits are obtained, along with B- or better in Business and Science courses and C grades or above in everything else, you must apply to be accepted into the funeral service program at MATC. Technically, it is an Associate’s Degree in Health Sciences: Funeral Service, if we’re being official. I was lucky that I already had the majority of my credits from the 1.5 years I attended college for criminal justice 10 years earlier.

Number Four: Once accepted (hopefully), you go through one more year of college at MATC in the funeral service program. This one year is only with other funeral director hopefuls. My class had 25 students in it, ranging from 20 year old kids (kids, ha) all the way up to 60 year old adults still trying to chase that dream. I love that enthusiasm! 24 of us would graduate.

Number Five: In going through that final year of school, one must also be registered with a funeral home as an “apprentice funeral director.” Basically, it’s all in the name: You are an apprentice, learning all the daily inner-doings as a funeral director would, being taught along the way and doing all the small, dirty work, to sort of earn your keep.

Number Six: Once you’ve graduated (most likely putting in about 2–3 years worth of college), you are still an apprentice who has to then complete 1,000 hours worked, and have assisted in 25 embalmings and 25 arrangements. The point of these requirements, is to give the apprentice enough experience in what they will be doing for a good portion of their day once licensed. When I was an apprentice, literally all I did for a long time was learn embalming and sit in on arrangements.

Number Seven: After graduation, you must also complete an internship at a funeral home which consists of 3 months proving you are sufficient in everything a funeral director does. The guidelines are laid out by the state, and there’s about 100 things that need to be checked off on that you have proven you can and know how to do.

Number Eight: After completing your apprenticeship and internship, you then take a few exams. There is a state board exam, consisting of 50 questions about the law pertaining to funeral service. The FTC (Federal Trade Commission) actually has laws titled, “The Funeral Rule,” so this is a legit thing. In Wisconsin, one must correctly answer 75% and above of the questions to pass. These questions pertain to your state only, so know your local laws! I passed this one my first try with an 85%.

Number Nine: The final step, after completing steps 1–8 so far, is to take and pass your national board exams. There are two exams: a “Sciences” section and an “Arts” section, with each one having 170 questions on them. You must gain a 75% or better grade in each to finally become a licensed funeral director. I am not ashamed to admit that I failed both my first attempts. The hardest step along the way is by far the national board exams. My second go at it, I passed both. You do not get a grade, just a PASS or FAIL print out immediately after. I cried when I called my mom afterward.

Number Ten: Celebrate! Along the way, you dealt with countless sleepless nights. You had many days of going to school full time, working until midnight or later, then staying up to study for a test. You questioned yourself every step of the way as it was truly Hell, but remember what I said in the beginning; do not doubt yourself. This is what you want to do in life. You earned it. Congratulations!

There you have it. The ten steps necessary to become a licensed funeral director in the state of Wisconsin. At least, that’s what I had to go through a few years ago. I know they are constantly changing the laws and updating procedures, and it’s certainly a good idea to stay on top of those. Every two years, you will have to “renew” your license as well. During your year of renewal, you need to obtain CEU’s (Continuing Education Credits), with the topics and hours laid out by the state.

As you can see, it doesn’t end with just going to school and passing your boards and acting as an employee. This is much more than that. This is about having a career and putting in a lot more hours than you can ever imagine. But the rewards are greater than anything you will ever experience. I’d liken it to becoming a registered nurse or doctor, honestly. Although I have no idea what that entails or is like, it’s the respect of your peers and knowing you helped a family through their worst moments that mean everything. And it should to you. To me, that is priceless.

So, do you really want to become a funeral director?